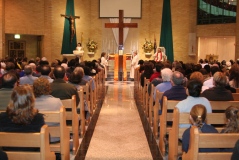 It is relatively easy to speak and write about ‘the Church’ in general terms. Drawing on our tradition as well as reflecting on the contemporary context and its challenges, it becomes possible to articulate visions of the Catholic Church for the future. It is perhaps ever easier to hold varied opinions about the Church and suggest reforms if you never have to put those opinions or ideas into practice.

The task of translating Catholic identity into mission, theology into practice, is a particular responsibility of local bishops, ministers, planners and lay leaders in the Church, including pastoral workers at a parish level and even those in your local parish ministry group. Again, a serene vision or theology of the Church is one thing, the experience and practical realities of Church life and reform are a little more complex (the move towards reform of the Roman Curia will no doubt prove the rule).

The challenge of implementing church reform has come to the fore in recent days through a number of conversations and forthcoming commitments. There is the task of writing an implementation guide for parishes as part of the Pastoral Plan I’ve been working on for the Diocese of Parramatta (how do you write an implementation guide for parishes that are unique in their gifts and needs, while holding them together as members of one local church?), there are preparations for Proclaim 2014, a conference led by the National Office for Evangelisation, which will continue its focus on transforming parish life, the experience of lay ministers I teach, many of whom experience keenly the gap between their best hopes and experience of community life, and then an upcoming address at a clergy conference for the Diocese of Lismore next month on the very subject of parish culture and practices of evangelisation.

All this has brought home the challenge of reforming our parishes in particular as the primary experience of the Church’s communion for most Catholics and the most immediate opportunity for a new evangelisation. The parish community is where visions of the Church and visions of reform are tested, either brought to concrete life or else struggle in their realisation. Unlike Europe where the new ecclesial movements have filled the void left by parish decline, when we talk about ‘the Church’ in Australia we are most often talking about our parishes (and sometimes, though less commonly, our schools).

In preparing for some of the work above, here are a few points that struck me about our parishes as relevant to our future mission as a Church. I hope these will be helpful as points of ongoing reflection for those at the coalface, serving in our parishes from week to week with inspiring dedication to the Gospel:

The very complexity of parishes expresses the fact that what lies at the heart of each and every parochial community is not simply a geographical jurisdiction but a fundamental network of relationships. In this sense, though properly a constituent of a diocese, each parish must be sustained from below, not merely by what Karl Rahner SJ described as “folkloristic attachment” to the Church but a real and intentional communion based on a lived discipleship for the sake of the world. A Church grows and is reformed by parishes and communities that focus anew on discipleship and the mission that flows from that relationship. Parishes grow and are reformed by having groups and individuals that are focused on the same.

5 thoughts on “reforming our parishes”