Prior to my entry into the Church my experience of Christian campus ministry had been limited to members of the Evangelical Union at the University of Sydney who while dressed in matching t-shirts failed to convince me of the value of organised religion. Hence, my experience of Christian ministry in the university setting is limited to say the least!

It was an unexpected privilege, then, to join the campus ministry staff at the Australian Catholic University (ACU) this week for a conference of leaders, and share some thoughts about planning and evangelisation in a tertiary environment.

I focused on the context of campus ministry, briefly addressing the critical role of the university within the Church’s life and then identifying some of the challenges for mission in a tertiary environment.

Without doubt, the Catholic university retains its significance as a primary way in which young adults can encounter the person, a community and living tradition of Jesus Christ, perhaps with more impact than other institutions. In the late twelfth century, with the emergence of the Cathedral School of Paris – which by 1170 had become the greatest university of Northern Europe, the University of Paris – and with the monasteries shutting their doors to secular students, the Catholic university became a central way by which the Church invigorated the Christian culture of medieval Europe.

The university embodied an ideal, a community of learning where the fullness of truth was sought through various branches of knowledge and through which faith became credible to human reason (you can read Blessed John Henry Newman’s The Idea of the University for a deeper consideration of universities as schools of universal knowledge). All in all, the great Catholic universities of Europe were not places for the mere communication of content but were schools for the formation of the human person in the light of truth and wisdom. 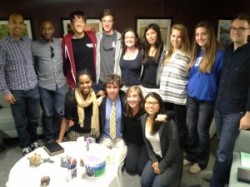 This ideal, of the university as a place for the formation of the mind and soul, remains relevant for campus ministry today as a counter-image to those who would view or engage with the university only as a form of factory for the training of workers and professionals to serve the economy and the interests of the State. Universities can underline for students that we do not simply do things but are, in fact, called to be someone, that we are persons with a vocation. Our universities can bring the resources of the Catholic intellectual tradition to the living of that vocation in human society.

In other words, Catholic universities ought to aim for nothing less than preparing persons to undertake a redemptive role in the world and to bring a Christian perspective to the progress and future of humanity. The culture of our universities ought to incarnate and testify to the fact that faith enriches and deepens our human experience, that faith allows us to encounter life, even suffering, in a new way, and gives direction, purpose and coherence to life.

To highlight the importance of the university consider this scenario. We know that young adults are absent from our parishes which remain (often despite themselves!) the basic unit of the Church’s life. Among all young adult Catholics aged 20-34, only 5-6% would attend Mass on any given weekend. In short, for young people parishes are simply not the primary connection they maintain with the Catholic Church today.

Even in middle high school, for instance, there are more students involved in church-related activities apart from Mass than would be inside our churches on any given weekend. That is, the connections between students and the Church are not primarily through attending worship but through church-related sporting teams (e.g. a netball or soccer club), a music or drama group, a community welfare or justice group, or a youth group, event or festival. All these attract more youth participation and engagement than the average Catholic liturgy (read the Christian Research Association paper on this subject here – PDF, 1MB).

In a similar way, our Catholic universities enjoy more daily contact with more young people in a faith-based environment than our parishes do. Each week, thousands upon thousands of students take part in an explicitly Catholic community of learning whether they have a faith commitment or otherwise. By bringing a strong and articulate tradition of faith to a contemporary culture, by mediating the living experience, culture, and language of Christian faith to young people who may never or are unlikely to darken the door of our parishes, universities can become once more centres of evangelisation.

The Pentecostal megachurches are learning in their own mission that they cannot rely on the experience of worship alone. While an experiential emphasis on faith, the professionalism of their worship services, and variety of programs have seen such megachurches enjoy tremendous growth in their first decades, as people come to maturity an overemphasis on individuality and the ever present danger of superficiality can lead to a plateauing of their life.

If churches want to ensure their survival over the long term, they must branch into education and social welfare, as Pentecostal churches such as Hillsong have done in recent years and as the Catholic Church has done for centuries. So the importance of the university and university ministry within the breadth or totality of the Church’s mission should not be understated as a way by which the Church meets and shapes contemporary culture.

While I have spoken of the ideal of the Catholic university in terms of Christian vocation and identity, this promise is not always so easy to realise.

One of the cultural realities for our universities is what has been described as an ‘educational reductionism’ which impacts not only on students but also our staff members. There are at least two principle factors driving this ‘educational reductionism’, which can leave universities as institutions focused on teaching students how to make a living rather than how to live.

Firstly, there is materialistic ambition which leads to a conception of the university as solely a means to private wealth and advancement. Secondly, there are the societal-economic expectations that come with government funding of our universities, governments that are concerned with a return on investment and productive citizens rather than necessarily good or virtuous ones.

To underscore the danger of such a utilitarian approach to education, consider this letter from a survivor of the Shoah which has relevance to the kind of universities we want:

Dear Teacher, I am the victim of a concentration camp. My eyes saw what no one should witness: gas chambers built by learned engineers; children poisoned by educated physicians; infants killed by trained nurses; women and babies shot and burned by high school and college graduates. So, I am suspicious of education. My request is help your students become human. Your efforts must never produce learned monsters, skilled psychopaths, educated Eichmann’s. Reading and writing are important only if they serve to make our children more human.

The potential of the Catholic university and campus ministry is to foster a genuine Christian culture of learning and excellence which forms people not to be highly-skilled racketeers but to be moral agents who pursue the common good in the light of faith.

It is true that once upon a time, the faith and practice of Catholic families, the surrounding Christian values of the wider community, combined with childhood catechesis followed by sacramental initiation might have been enough to sustain Catholic identity into adulthood for some, even if not all. Even then, it could be intimated that many were perhaps ‘sacramentalised’ without being evangelised. Today we meet second-generation unchurched families and students in our parishes and universities with little memory or familiarity with the faith. This might include the staff members of our universities as well as their student body.

It underscores for us that personal and ecclesial faith has never been the mere consequence of having Catholic parents or having attended a Catholic school as much as these may be helps to holiness. Faith is communal and ecclesial but always grounded in a personal decision to live in and for Christ, a decision that cannot be delegated to any other.

The university may be one of the last communities of the Gospel within which the riches and dynamism of faith is presented and offered to students who are at their age testing the possibility of any form of commitment in life before  they embrace their futures. It is a time when young adults are asking questions about their identity and their future, asking who they are and what to live for.

We must offer our students a compelling theological anthropology, a story about who we are under God with significance for our relationships with one another and our vocation in the wider world. The university must connect that perennial, personal search for meaning with the Gospel, a Gospel that opens up the deep dimensions of life and interprets that life with a greater end or teleology in sight. As a learning and research community, the university must connect creation to redemption, nature to grace, culture to covenant so that young adults can take their proper place in the world, not as mere producers and consumers, mere citizens of the State, but as virtuous Christians, saints-in-the-making.

To enter the Church is not to leave the world, but to be in the world differently, so that the world itself is different because there are individuals and communities living their lives because of, in, and for the sake of Jesus Christ.

To be Church, to be a community of believers and ministers within a university, is never to withdraw from the complexities of culture but to speak, witness and inhabit this world, a world which is very much in our hands, with a perspective and a commitment that claims to illuminate its depths and heights. As Komonchak continues, it is to insist that the truth and meaning of this world cannot be found in its fullness apart from what God has revealed in Jesus Christ by the Holy Spirit. This is our identity and our mission within the university. Indeed, this proclamation and witness forms our Christian vocation in the wider world.