It is now eight months since the road to Plenary Council 2020 was formally opened at Pentecost 2018. It will be the first Plenary Council that the Church in Australia has held in over eighty years and comes at a time when the challenges for and to the Catholic faith – and so the allied possibilities for reform – are multiple. Consider parish decline, the shape of Catholic education, failures of governance, and the future of religious freedom alone.

There are many who have taken up the Plenary Council with great faith, enthusiasm and hopeful anticipation. Indeed, over 30,000 people have engaged with the Plenary Council process across the country to date. In my own Diocese of Broken Bay the local response from communities has been overwhelming and the Diocese has registered the fourth highest number of responses (exceeded only by the Brisbane, Melbourne and Perth archdioceses) and the highest number of responses in Australia in proportion to the number of its parishes.

It can be acknowledged that some have lent their voice and insights to the process with reserve, with a natural scepticism borne of experience or lingering questions regarding what, if anything, is truly possible. Others will choose to be bystanders on the road to 2020, content to watch the process unfold without contribution. This non-engagement can express reticence about the value of dialogue within the Church per se, unclarity as to the purpose or implications of the Plenary Council, or a detachment from the broader Church, perhaps in preference for local concerns or resignation to the status quo.

Underlining these reactions to the Plenary Council will be varying understandings of the Church itself and of the possibilities for reform. Contrasting ecclesiologies about the best way in which the Church can exercise its mission are certainly not new. Polarisation has been an increasing mark of Catholic exchange particularly since the Second Vatican Council and intensified in the ‘phase of disillusionment’ that followed. These divisions about the way forwards for the Church have been inflamed by the Church’s waning influence in the Australian community and the search for a response to a loss of credibility and public voice over past decades which risks for the Church what Greg Sheridan has described as ‘complete strategic irrelevance’ (‘Christian churches drifting too far from the marketplace of ideas’, The Australian, 4/6/2016). The resulting ecclesial tensions and ideological rifts will inevitably spill over to shape people’s expectations and engagement with the Plenary Council as an initiative of the Church, explicitly geared as it is towards reform.

However, it is because of these ecclesial divisions and differences, rather than despite them, that the Plenary Council matters. To be clear, the Plenary Council is not an ecumenical council that will define or determine articles of faith (what we are to believe) nor can it legislate on matters of discipline which the Holy See has reserved to itself. It will not deliver an entirely ‘new’ Church which has no connection to its past, nor should it seek to do so. It is an organ of governance that can assist the Church to live God’s mission more faithfully as “a sacrament or instrumental sign of intimate union with God and of the unity of all humanity” (Lumen Gentium 1). 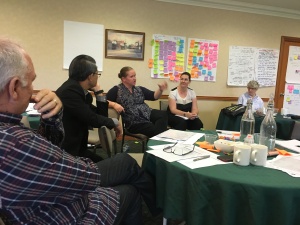 Towards this end what the Plenary Council will do and is doing is generating a significant, even if for some unsettling, conversation about the way in which the Church can best practice its mission in Christ into the future. A Plenary Council can, for example, pass legislation regulating how doctrine is to be taught, how worship is to be regulated and how governance is to occur in practice. It is to these matters that diverse input is needed for the benefit of the Church’s missionary mandate.

The Plenary Council is a call to focus as a communion of faith on the ways in which we are summoned by God through the action of the Holy Spirit to live the life and mission of Christ in contemporary Australian society. This includes those ways in which the Church is called to be a sign of contradiction in the world, to collaborate towards the common good with others of good will, and to serve as a leaven transforming the world from within.

One of the chief reservations that has been expressed about the Plenary Council is that initiating dialogue about the future of the Church in Australia will encourage false or unrealistic expectations. As the saying goes, ‘expectations can be premeditated resentments’ when reality does not conform to our hope or our views have lost connection with our tradition. This makes it even more important to clarify the nature and procedure of a Plenary Council so there are good reasons for our hope, not magical thinking that will leave us disappointed.

As already noted, a Plenary Council is not a vehicle by which dogma or doctrines pertaining to faith and morals are reshaped or changed. The purpose of a Plenary Council is to ensure that provision is made for the pastoral needs of the people of God and so, with regard for the universal law of the Church, it is ‘to decide what seems opportune for the increase of faith, the organisation of common pastoral action, and the regulation of morals and of the common ecclesiastical discipline which is to be observed, promoted and protected’ (Canon 445).

Under present canon law, the decisions of the Council are made by bishops by nature of their episcopal ordination as successors of the Apostles. However, it would be mistaken to read this exercise of authority as an isolated act for in casting their deliberative vote the bishops are required to be attentive to the counsel of the people in their dioceses and at the Council sessions themselves. The magisterium must sense with the Church as a whole where the Spirit’s inspiration is leading. Lay delegates at the Council will have a consultative vote, namely a real vote which will be written and tallied and is to be considered seriously by those with a deliberative vote. So it is that the bishops are obliged to make decisions on the basis of their careful discernment of the work of the Holy Spirit in the minds and hearts of the People of God, recognising that the sense of the faith of the faithful – what is known as the sensus fidelium – is a source of the Church’s life and learning as it pilgrims through history.

To elaborate, the sensus fidelium is that gift of the Holy Spirit which enables the whole Church to receive and to transmit the Catholic faith effectively and faithfully. The lay faithful as living and active members of the Church contribute to this instinct of faith and are not merely passive recipients of what the hierarchy teach and theologians explain. As such it is reasonable that appropriate dispensations may well be sought from the Holy See to ensure representation of laity at the Council sessions is maximised (this matter has been discussed by the Executive Committee and Bishops Commission for the Council). Following the sharing of a sense of faith and the weighing of the issues and viewpoints raised, it is to the magisterium of the bishops to judge with authority whether opinions which are present among the People of God, and which may seem to be the sensus fidelium, actually correspond to the truth of the tradition received from the Apostles.

It is theologically important to affirm that individual views and opinions shared through Plenary Council sessions across Australia bring real perspective and insight to the Church’s situation, borne of concrete contexts. As it has been remarked, given that dialogue within the Church is not an ingrained habit or cultural norm for many of us as Catholics, some ‘will probably speak clumsily, angrily or shallowly the first time around. It is only over time that we eventually learn what we most deeply want to say.’ It is also true that the views of individuals need to be brought into conversation with the whole Church as a body of the faithful – hence the need for mutual listening and shared dialogue in the formation of an agenda for the Plenary Council. This dialogue is a requirement because it is in the lives of the faithful that the Word of God is lived and expressed. In discerning and taking decisions at the Council, the bishops are called to be a listening and learning body of teachers as well as discharging an apostolic commission to authentically interpret what is true to and advantageous for the faith.

Considering what has been shared, the concern that a Plenary Council would change Catholic doctrine under pressure of populism is unfounded and does not align with the reality, purpose or mandate of such a Council.

Nor does it represent the intent of the listening process underway until Lent 2019. The thousands upon thousands of submissions and voices they represent will shape the major themes that will constitute the agenda of the Plenary Council. Naturally in the abundance of data received will be conflicting interpretations of what has been revealed in Jesus, the Scriptures and our Catholic tradition and varied proposals on how best to incarnate the Gospel in our present situation and our future. This interpretive maelstrom is not a new experience for the Church (think of the disputes of Saints Peter and Paul, and the divergences of the Pauline and Johannine communities).

However, what is new in the submissions toward Plenary Council 2020 are concrete situations and questions of this moment of history for which we need to invoke and involve the Spirit’s gift of understanding. The preparations for a Plenary Council in 2020 require a sounding of the lived experience of faith and the Church among people today because we cannot seek to grow the Church as the body of Christ by closing the door against reality, as messy or vexed as that reality can be. Dialogue as a means of ecclesial discernment expresses the intrinsic relationship between the magisterium as a teaching office and the sensus fidei as a grace of the present. It affirms our faith in the capacity of the whole Church to attend to the Spirit’s guidance into ‘all the truth’ (Jn 16:13).

As I see it we are compelled to engage at this time in rigorous conversation about the future of our parishes, where the percentage of participation is declining to single digits across the nation; the role of Catholic education in the mission of the Church as enrolment numbers decline in a number of jurisdictions; the effective proclamation of and witness to the faith in a pluralistic environment; the quality of leadership – ordained and lay – required for the exercise of the Church’s mission in a new era and in address of social and political developments; the charisms of all the baptised which remain largely inactive and are yet to be fully engaged, and our continued development of a healthy, safe and missionary ecclesial culture. It is no secret that it is our personal and shared discipleship that stands as the deepest source of renewal across these varied aspects of the Church’s life.

As such, the Plenary Council will not give rise to a ‘church of preferences’ but rather provides the opportunity, if we take it, to better equip the Church in Australia to proclaim the unchanging Gospel in new and vital ways. Our Catholic tradition is none other than the Church’s reception of Jesus through time under the guidance of the Holy Spirit. In this time of challenge and opportunity for the Church it is incumbent upon us to seek out, receive and then voice what this Spirit is saying to the churches (Rev 2:7).